Note: This isnt done (well theres a full top 10, just not a full entry for each), but I’m not going to finish it and I’m sick of seeing it floating around in Drafts

I thought I’d watched a lot of anime this year. But looking back I only watched around fifty shows, actually, I suppose that’s nearly one a week. Is that a lot? Who can say. Not I anyhow. Well, whether I watched a lot or not is really secondary to the main issue, which is quality and based on that metric it was an excellent year for anime. It’s been a while since its been a meaningful chore to decide what to include. But this year it really was a struggle and some great stuff didnt make it, like C – The Money of Soul and Possibility, Highschool of the Dead, Code Geass, One Out’s, etc. To be honest there was so much good stuff out there that I would suggest taking a look at my complete anime list over on Myanimelist if you need some viewing suggestions. Of course, I only watch an anime when its complete, which means that some great looking stuff wasnt even eligible for inclusion (I’m looking at you Persona 4 Animation and Fate/Stay Zero, among others).

While I have simply labelled this top ten anime of 2011, what it actually is is top ten anime series or OVA’s. I never really include films, but I still watch them. So with that in mind I would heartily recommend giving Summer Wars a go, and if you are a fan of Trigun you owe it to yourself to check out Trigun: Badlands Rumble.

Ah, well this ended up being finished much later than expected. The problem I have is that I tend to push these off to a point where all I can remember is wheteher I liked something or not but no specific details. Which leads to me re-watching stuff, which leads to pushing this off, which leads to…etc. As such I’m afraid that most of the sections are shorter than usual, which is probably a relief for my more regular readers (i.e. myself). But dont let the brevity dissuade you from watching these, they are all more than worth your time.

This was great. Everything you could want from a slightly absurd slice of life comedy. It was entertaining, amusing and endearing. It was also akin to visual crack which I mainlined in one shot. I need more of this and I need it now! I also liked that the main character managed to be “cute” without the usual overly-intentional creepiness a lot of these things have. I mean I’m under no illusion that the character was designed to appeal, its just that in this case it was somewhat artfully done as opposed to slapping you round the chops with its obviousness. There was a a bit of pathos here and there which was well done (another rarity with these kind of things). So throw this on if youre feeling down or just want a laugh, its light and uplifting.

Amazing. Easily one of the best anime I’ve seen in recent years and frankly one of the best I’ve ever seen. Much like films and books when it comes to anime its fairly common to hear the old refrain of “you should read the manga”. Admittedly this is not entirely without merit as a lot anime adaptaions are either poorly done or released before the manga has finished so the story diverges wildly (and often poorly). Such was the case with the original Fullmetal Alchemist anime (which I now wouldnt watch if you paid me). However I’ve read the Fullmetal Alchemist manga and (while its sweet) this is better. Then again its a nearly perfect adaptation and the minor changes and additions simply make it better. This can be rather intense and I had to take it slower than I normally do, watching only around a dvd’s worth (five to six episodes) a night (though there were marathon sessions at the beginning and end). It works very well like that, watch a few episodes and take a break when it feels natural. But whatever way you watch it, just make sure you watch it.

I really enjoyed this. As one would expect from reading the description it is a little weird and the often schizophrenic changes in tone (and arguably genre) would be jarring if they werent carried out so well. The series makes it clear going in that this is going to be a little strange and require’s a bit more attention or perhaps investment, than usual. But I found it to be well worth it. There’s comedy, romance, drama, action, horror, often all in the same episode. But it is never anything less than immensely entertaining. And thats really all I watch this stuff for. Also, when’s the last time you saw a guy wearing a magical dress power up by getting cuter, fly into orbit and then drop dick the head off a flying whale? Haruna is also an amazingly endearing character (or should I say moe?) she’s a major source of humour as well as some excellent drama and character development.

There is a certain subset of the mystery genre that I only really come across in Japanese anime and manga, it bears a lot of resemblance to the classic “Whodunit?” as exemplified by the Sherlock Holmes stories and novellas. Much like the Sherlock Holmes stories it is something I am very fond off and would like to see more of. It’s good then that this year seems to have seen a big upsurge in this type of story; with three entries in my Top Ten – Go Sick, UN-GO and Kamisama no Memochou. Though of the three Go Sick sticks closest to the “traditional” formula.

There is something compelling about a well done slice of life story. I think it’s because when done well slice of life stories allow the reader/viewer to experience a broad range of emotions which make’s the experience feel more “real” than more mono-emotional stories. DOtSO is no exception to this and it masterfully plays with the viewers emotions. While personally I found the overall mood to be hopeful but bittersweet the show does drag the viewer skillfully through a number of emotional states.

This series almost perfectly encapsulates everything that is great about modern super-hero’s. It’s, perhaps due to the subject matter, very “Western” in tone, but at the same time it offers a breath of fresh air from the often stale world of “traditional” super-heroics. 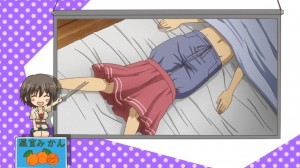 The first series of this made it into last years list and the OVA and second series do nothing to shake its place in the list. So I’m more or less going to say again what I said last year.

It’s sort of hard to pin down why exactly I’ve included this show…or is it? Is it difficult or have I simply lost the ability to apply critical thought to the various things I read, watch or play? While I do try and actively suppress critical thought when actually dealing with a text (because I’m engaging with the text for fun, not for research) it is leading to some difficulties applying critical thought in hindsight. Anyhow, on the surface BtTtS (Baka to Test to Shoukanjuu) is another high school harem comedy. But much like with Asobi ni Ikuyo appearances are deceiving.

For a start I wouldnt class it as a harem comedy. Only two girls are interested in the main character and two girls a V,not a fucking triangle, nor a harem makes. While it’s generally classed as a romantic comedy the comedy is the ascendant part of that pairing. There is little actual romance in the show, lots of allusions to it and understated displays of it, but practically no actual romancing goes on. I think (after just finishing a second viewing of this) the key appeal of this series is how fresh and polished it feels. While the setup of the school is amusing and unique theres no fantasy romantic comedy worth its salt that doesnt have a good hook in the setting. The characters, all of whom are appealing and amusing, are also (well done) re-treads of stuff we’ve seen before.

But these familiar elements are but together so well that you just dont care if its familiar. The show is very, very slick. The animation is well done and slips seamlessly between multiple styles without losing a step (I particularly love the heavily stylised, almost art deco, stuff). The humour is well done and almost constant, while they show may not have you laughing aloud all the time it always has you smiling. The comedy is a good mix of cleverly written dialogue,visual comedy, paradoy and slapstick. This show just feel’s fun. It also has an, innocence, I suppose you could say about it that is rather refreshing. The romance in it is understated and virginal, the fan service is limited and quite tame (and often provided comedically by the male cast), the drama is very light and none of the humour is mean spirited. This makes Baka to Test a light, fun watch. A breath of fresh air in an otherwise over-crowded genre. Oh, and the theme song for the ending sequence is quality.

I’m not sure how universal the appeal of this show would be. A decent chunk of the humour riff’s of other anime, videogames (I love the “Snake?” bit) and manga. Though none of the references are that obscure so a passing familiarity should serve you well. If you enjoy romantic comedies or are just looking for something amusing, fun and not too taxing to watch then you could do (oh so much) worse than to give this a go.

This was one of the two big internet anime darlings of the year, the other being Steins;Gate. I don’t have the mad-horn for it that a lot of people seem to but I do agree that it was a very enjoyable show and an excellent deconstruction of the magical girl genre. I would have liked it a lot more if the main character hadnt (literally) cried in nearly every single episode. I also found the ending to be self-indulgent on the part of the writers. Now it might sound like I’m complaining a lot about it. But to be honest these are two relatively minor complaints about an otherwise excellent show. In one way, while I enjoyed watching this, I’m more interested in seeing “what comes next”. Because in many ways it feels like PMMM has done to magical girls what Neon Genesis Evangelion did to giant robots and that can only be a good thing.

The third of the three “mystery” shows I mentioned above Kamisama no Memochou is set in the real world and has basically no fantasy elements. It

This site uses Akismet to reduce spam. Learn how your comment data is processed.

The Roll of Days